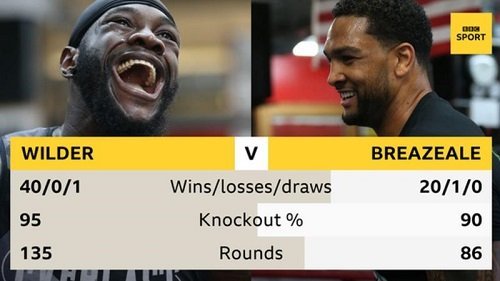 Buckle up for a brazen battle of fists as Deontay Wilder takes up Dominic Breazealein New York.

Very few would want to get into the ring with the ferocious Bronze Bomber. The last time, Wilder and Fury lavishly entertained us with some great boxing ecstasy with Wilder sneaking out with a win in a well contested encounter.

Moreover, this match with Dominic Breazeale would aim to transmit a resounding message to Anthony Joshua, as the American legend is largely eying Joshua’s belts.

Some three years ago, Dominic Breazeale was battered by Anthony Joshua at the O2 Arena, with the Californian showing impressive tolerance and durability against Joshua who bested him from the start with superior hand speed and agility.

“When I looked at his interview after and I saw his face, I said ‘wow, you definitely took a beating’, and he stayed in there,” Joshua told Sky Sports.

“Breazeale is tough. He got hurt in the second round, stumbled, stayed on his feet.”

Dominic has outrageously improved since then aggressively pushing his records to 20-1 since then with 18 wins.

This Dominic Breazeale and Deontay Wilder fight gets more sumptuous when we remember that both fighters have had a fiery scuffle some time back in 2017 in a hotel where Wilder made bloodthirsty comments of killing an opponent in the ring.

Nicknamed Trouble, will Dominic Breazeale be able to fend off that savage punch power Wilder has become famed for?

BetVictor is giving you a sauced 30/1 for Wilder to beat Breazeale. Let us look at the offer, shouldn’t we?

This offer is for strictly restricted to new customers and is available once per household.

The following are not eligible to participate in this promotion:

– Qualifying bets which are Cashed Out, or Partially Cashed Out

– Deposits made through Moneybookers (skrill), Neteller or PaySafe

– Should you be staying in any of these following countries, you will not be eligible for the offer:  Belarus, Georgia, India, Macedonia, Mexico, Montenegro, Nigeria, Nepal, Serbia, Slovenia, South Africa, or Thailand.