Home Promotions BetFred: Eye-popping 33/1 for a draw in Deontay Wilder vs. Dominic Breazeale
Updated: May 2019

BetFred: Eye-popping 33/1 for a draw in Deontay Wilder vs. Dominic Breazeale 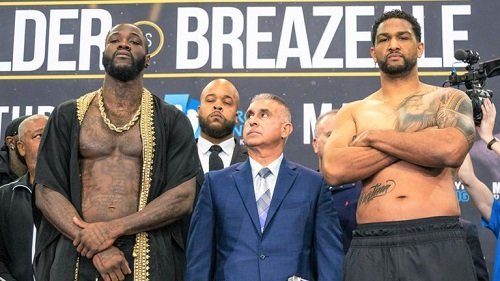 Dominic Breazeale is definitely far from vacation when he meets Deontay Wilder in the ring for their WBC world heavyweight fight. Courage readily deserts many when they step into the ring with the commanding warrior Deontay Wilder who has a dazzling 39-0 KOs embroidered to his name.

Yet Dominic Breazeale is blazing with bravado and enthusiasm, promising to give Wilder a lesson of his lifetime as he promises to specifically ensure Wilder never wants to lace up his boxing gloves again

At 33, Dominic Breazeale has risen audaciously to the summit of his boxing career; amassing a 20-1 record since his loss to Anthony Joshua at the 02 arena three years ago.

For Dominic Breazeale, this is a chance to settle scores with Wilder as the pair had some rough scuffle two years ago in a hotel.

“I will beat him so bad that he is not going to want to ever lace up the gloves again. When I am done with him the mental aspect of boxing is going to be completely beaten out of him.

“This belt is everything to me, it’s my Super Bowl.”

If you are among the party rooting for a draw, Betfred is offering you 33/1.

It is all simple. 33/1 for you in cash if the match between Dominic Breazeale and Deontay Wilder ends a split.

NO ENHANCED ODDS, 33/1 IS PAID IN CASH IF THE MATCH ENDS IN A SPLIT WITH NO OUTRIGHT WINNER.