Both Teams to Score Betting Explained

Although match result, or 1X2, is still perhaps the most popular market when it comes to football betting, Both Teams to Score (BTTS) is not far behind. 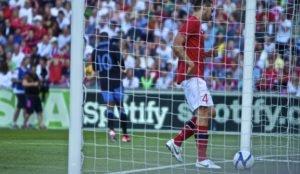 In fact, some bettors will only gamble their money on Both Teams to Score markets as they believe they have a better chance of making a profit.

What is a Both Teams to Score Bet?

It sounds pretty self-explanatory but a Both teams to Score bet is one where the punter will wager whether he/she believes both teams will or will not score in a football match.

If the bettor believes both teams will find the net, they will bet “yes”, and it’s “no” if they believe neither or only one side will score during the 90 minutes.

Advantages to Both Teams to Score Bets

Well, the biggest advantage a bettor has by placing a bet on a Both teams to Score market is that they do not have to predict who will win a match. As long as both teams find the net, if they bet “yes”, the bet is a winner.

This also means that the bet stays alive until full time. If you bet on the match result market, your team may be trailing by a couple of goals at half time or two or more teams may be losing in your accumulator. With a Both teams to Score bet, unless you bet “no” and both teams have scored, you’re never actually behind until the whistle goes to signal the end of the match.

You could have three matches in an accumulator with teams trailing by several goals, but as long as those sides manage to find a consolation goal from somewhere it will give you a winning bet.

It’s also an extremely good bet for those bettors who like to take advantage of cash-out features. Many people will place an accumulator bet of maybe six or seven selections, and have four or five in at half time. This is a great opportunity to cash out and take what the bookmaker is offering you. Especially if one or more teams who are yet to score haven’t been that great going forward or managed many shots on goal.

HOW TO CHOOSE THE BEST ONLINE BOOKMAKER?

Tips to Making a Profit with BTTS Bets

When at the research stage before choosing your selections, you don’t really need to look at form figures or league position. You simply look at the amount of goals each team has scored and conceded.

The best tips we can give you are:

• Pay attention to those teams who both score and concede on a regular basis
• Look for higher placed teams playing away at a supposedly lesser team who still score several goals at home. 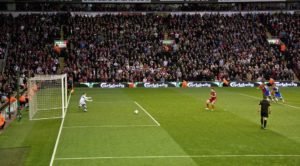 Two teams to use as an example of the first our first tip is Hull City and Preston North End. During the 2018/19 Championship season, Hull scored 66 and conceded 68 in their 46 league matches. Preston netted 67 and conceded 67. These are two teams who concede the same or a similar amount to what they score.

So, it would be a good bet to back “yes” in the BTTS market when they faced each other. It proved to be the case as well, as the first meeting ended 1-1 and the second was a 2-1 victory for Hull.

For our second tip, we need to explain further. Do not just bet BTTS on any high placed team player lower opposition. Look at the stats first.

Make a note of teams high up in the table who haven’t conceded many goals during the season, but who have a relatively high BTTS record on their travels. Then look at the lower placed home side and how many of their matches have seen both teams score.

For example, Liverpool conceded just 22 goals in the Premier League during the 2018/19 season but had a 53 % BTTS statistic in away matches. Southampton struggled towards the foot of the table all season but had a 79% BTTS record at home in league matches.

When they met with Southampton as the hosts as the season drew to a close, both teams found the net despite Liverpool finishing the match as clear winners.

As well as your traditional yes/no Both Teams to Score market, there are a few alternatives offered by most bookmakers.

• BTTS & Match Result – You combine a yes/no bet with a bet in the 1X2 market. For example, you may have selected “yes” and Liverpool to Win when they played Southampton away in the above example. If you did that, your bet would have been successful. This market usually offers relatively good odds as well
• BTTS & Over/Under – This market requires you to predict if both teams will score and whether or not there will be over or under a certain amount of goals in the match. The odds for this market can offer more value in matches with two high scoring teams than each individual bet would give you, and can be very good if you bet “yes” and under 2.5 goals and it comes in.
• BTTS in Both Halves – This bet requires you to bet on a match where both teams will score in both halves. So, the home team must score in the first half and the second half, and so must the away team. This is an extremely difficult market to bet on, as even high scoring games can see one team fail to score in either half, but with odds averaging around 10/1 it can be profitable if you get it right.

CRITERIA WE USE TO CHOOSE THE BEST BOOKMAKERS

INFORMATION WE LOOK AT FOR ALL BOOKMAKERS

What is Point Spread Betting – Guide for Beginners